When I began this blog I thought the Winter Gardens was the name given to the formal gardens alongside the Esplanade in Rothesay. I've now found out that it's actually the Grade A listed building in my photos below. Built in 1924, many famous music hall entertainers performed here. Redeveloped in the 1990s, it's now called The Discovery Centre, housing the tourist information office and shop, a 90-seat theatre/cinema, and restaurant. 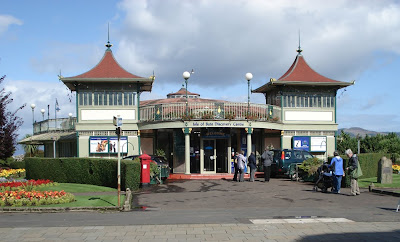 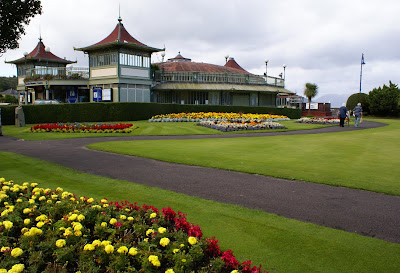 The surrounding gardens are very attractive and well looked after. 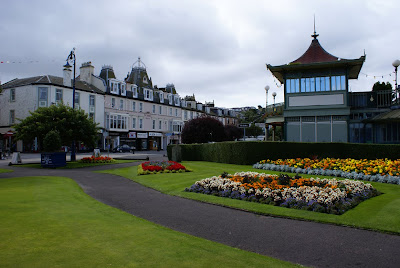 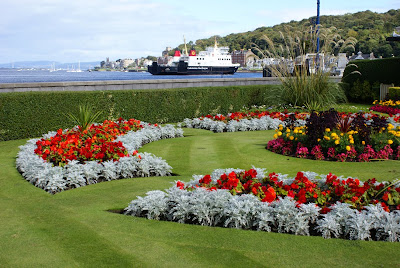 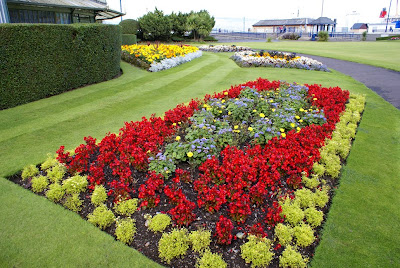 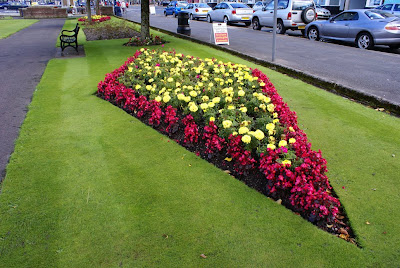 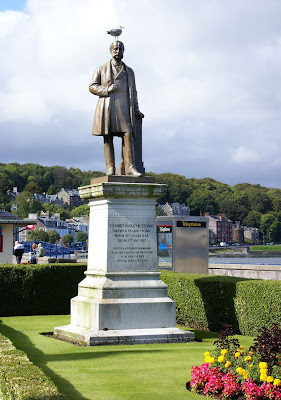 The statue of Alexander Bannatyne Stewart (1836-1880), Convenor of Bute. He gave thousands of pounds of his own money to charities on the island and cultivated flowers at his house, Ascog Hall, growing superb varieties of orchids. 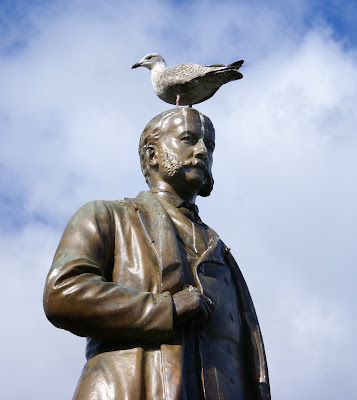 The statue is in a bit of a mess but there's not much that can be done to stop seagulls from standing on his head! 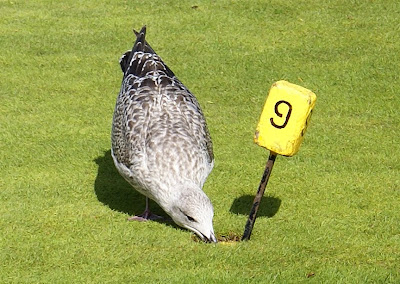 This one was drinking water from a hole on the putting green - I just missed a better photo when his whole head disappeared down the hole! 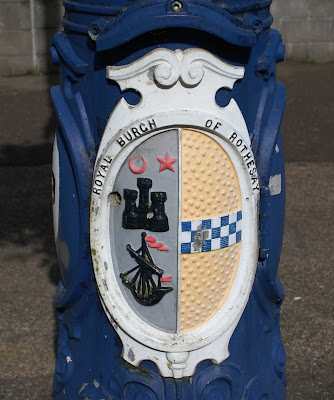 Very nice Jane, I'm itching to go back for a short break,but alas the family are not keen on the idea.

I don't blame your husband for not liking the pipes,it can be a bit of a din at times!

I was at the pipe band festival in Glasgow Green a few years ago it was most enjoyable,I came close to buying a kilt!

I wonder if you have seen this?

I don't think Mr Salmond could afford it at the moment!

great blog on the winter gardens and rothesay, I did shows there many moons ago when the crowds came 'doon the watter' for the fair fortnight, nice to see rothesay is still well looked after

Many thanks Derek, nice to hear from you!

I'd love to go back to Rothesay - maybe in May when I'll be back in Scotland.

Loved seeing the photos of the Winter Gardens. My grandfather, Alexander Stephen, was in charge of having it all built many decades ago. Fun to see it photos as I haven't been back in 8 years. Thanks for posting.

Thanks Stephanie, lovely to hear from you. Glad you liked the photos. It's fascinating to hear about your grandfather!

I would not have found Rothesay by myself, even though I was very interested in winter gardens. It must have been lovely in its heyday.

Thanks for the link
Hels
Art and Architecture, mainly
http://melbourneblogger.blogspot.com/2011/05/what-wasis-winter-garden.html

Jane
Kilmarnock, Scotland, United Kingdom
Finally moved back to Scotland in 2011 after nearly 50 years away!!! Do stop and say hello - it's always a treat to hear from anyone who loves Scotland! Click on most of the photos to see them full size.

CONTENTS OF THIS BLOG - BY MONTH

CONTENTS OF THIS BLOG - ALPHABETICAL 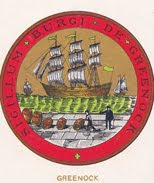 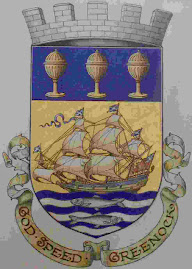 SONG OF THE CLYDE

"I sing of a river I'm happy beside
The song that I sing is a song of the Clyde
Of all Scottish rivers it’s dearest to me
It flows from Leadhills all the way to the sea
It borders the orchards of Lanark so fair
Meanders through meadows with sheep grazing there
But from Glasgow to Greenock, in towns on each side
The hammers’ ding-dong is the song of the Clyde

(Chorus)
Oh the river Clyde, the wonderful Clyde
The name of it thrills me and fills me with pride
And I'm satisfied whate'er may betide
The sweetest of songs is the song of the Clyde

Imagine we’ve left Craigendoran behind
And wind-happy yachts by Kilcreggan we find
At Kirn and Dunoon and Innellan we stay
Then Scotland’s Madeira that’s Rothesay, they say
Or maybe by Fairlie and Largs we will go
Or over to Millport that thrills people so
Maybe journey to Arran it can't be denied
Those scenes all belong to the song of the Clyde

When sun sets on dockland, there’s beauty to see
The cry of a seabird is music to me
The blast of a horn loudly echoes, and then
A stillness descends on the water again
'Tis here that the sea-going liners are born
But unlike the salmon, they seldom return
Can you wonder the Scots o’er the ocean so wide
Should constantly long for the song of the Clyde?"

The first song I learnt to sing from memory! I don't know who wrote it though I've heard it sung by many well known singers. Here is a link to it sung by Kenneth McKellar (over a great video)!